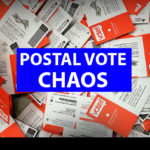 Last month, 21WIRE reported on a Democrat-led plot to delay vote counts in key battleground states. The Transition Integrity Project (TIP) are on record as war-gaming a plan to spread mayhem and misinformation following the November 3 presidential elections by capitalizing on a party-wide strategy which seeks to delay postal vote submissions up to 10-14 days after the national election on Nov 3rd. It relies on taking advantage of any presumed delays in determining the winner (due to the deluge of postal votes) in a group of key swing states, including hotly contested Michigan and Wisconsin.

[T]he American people are being prepared for a contested election that will fuel public anxiety and revolt. This all fits with the overall strategy of the TIP. Selected journalists will be used to provide bits of information that serve the interests of the group while the people will be told to expect a long and drawn-out constitutional crisis. Meanwhile, the media, the Democrat leadership, trusted elites and elements in the Intelligence Community will put pressure on Trump to step down while firing up their political base to take to the streets. TIP’s 22-page manifesto makes it clear that mass mobilization will be key to any electoral victory. Here’s an excerpt from the text:

“A show of numbers in the streets-and actions in the streets-may be decisive factors in determining what the public perceives as a just and legitimate outcome.”
(“Preventing a Disrupted Presidential Election and Transition” The Transition Integrity Project)

This week a Michigan court ruled to block the Democrat plan which appears to be designed to sow chaos in the wake of an engineered postal fiasco, with the presiding judge noting that, “The constitution is not suspended or transformed even in times of a pandemic…”

Needless to say, the Democratic Party was visibly disheveled by the court’s decision. DETROIT (AP) — Absentee ballots must arrive by Election Day to be counted, the Michigan Court of Appeals said Friday, blocking a 14-day extension that had been ordered by a lower court and embraced by key Democratic officials in a battleground state.

Any changes must rest with the Legislature, not the judiciary, the Republican-appointed appeals court judges said in a 3-0 opinion.

Absentee ballot extensions in Wisconsin and Indiana have also been overturned by higher courts.

Michigan’s ability to handle a flood of ballots will be closely watched in a state that was narrowly won by President Donald Trump in 2016. Secretary of State Jocelyn Benson last week said 2.7 million people had requested absentee ballots, a result of a change in law that makes them available to any voter.

Michigan law says absentee ballots must be turned in by 8 p.m. on Election Day to be valid. But Court of Claims Judge Cynthia Stephens had ordered that any ballots postmarked by Nov. 2 could be counted if they arrived within two weeks after the Nov. 3 election.

Stephens said there was “unrefuted evidence” about mail delivery problems because of the coronavirus pandemic. She said more than 6,400 ballots arrived too late to be counted in the August primary.

The appeals court, however, said the pandemic and any delivery woes “are not attributable to the state.”

“Although those factors may complicate plaintiffs’ voting process, they do not automatically amount to a loss of the right to vote absentee,” the court said, noting that hundreds of special boxes have been set up across Michigan.

The court also reversed another portion of Stephens’ decision, which would have allowed a non-family member to deliver a completed ballot in the final days before the election if a voter consented.

“The constitution is not suspended or transformed even in times of a pandemic, and judges do not somehow become authorized in a pandemic to rewrite statutes or to displace the decisions made by the policymaking branches of government,” Judge Mark Boonstra said in a separate, 10-page concurring opinion.

Benson and Michigan Attorney General Dana Nessel, both Democrats, had declined to appeal Stephens’ rulings, leaving it to the Republican-controlled Legislature to intervene.

The Michigan Democratic Party was disappointed.

“Voters should not be punished for delays in the U.S. Postal Service or for unexpected emergencies that could make it a challenge for them to get to the polls on Election Day,” the party said.

The case was heard by appeals court judges Boonstra, Michael Gadola and Thomas Cameron. All were appointed by Rick Snyder, a Republican, when he was governor and then subsequently elected.

The lawsuit was filed by a group called Michigan Alliance for Retired Americans.