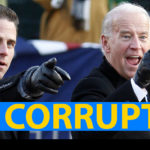 This could be one of the worst cases of open political corruption in US history. In reaction to this week’s New York Post exposé on Hunter Biden’s damning email cache and evidence of he and his father Joe Biden’s influence peddling in Ukraine, the mainstream media has chosen to completely ignore the story, relying instead on partisan Democratic Party operatives in the Silicon Valley to literally erase the story from monopoly platforms Twitter and Facebook – effectively shielding the American voter from factual information which is definitely in the public interest.

The evidence – which has not been denied by the Bidens, clearly demonstrates that Ukrainian energy firm Burisma had told Hunter Biden they wanted “to close down any cases/pursuits against” its top officials in Ukraine. That’s why Hunter Biden was hired on his lavish salary of $50,000 per month – despite having no prior experience in energy or the Ukraine. And it worked. His father, then US Vice President Joe Biden, pressured the Ukraine government to fire the prosecutor Viktor Sholkin. But the corruption doesn’t end there. In another email, Hunter told his kids “unlike your grandfather I won’t take half their salary.”

We all just going to ignore the emails that Tucker Carlson revealed on his show last night of Hunter telling his kids “unlike your grandfather” he won’t take half their salary?

This and other disclosures appear to implicate Democrat candidate Joe Biden in corruption, graft, bribery and white collar embezzlement, apparently totaling in the millions of dollars. An unbelievable disclosure.

Thus far, only FOX News host Tucker Carlson is covering this historic story. The rest of the US media are silent, and for obvious reasons. They are deeply partisan and do not want this story to damage Joe Biden’s Presidential run. Watch:

Watch the latest video at foxnews.com