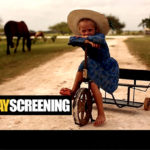 Our weekly documentary film curated by our editorial team at 21WIRE.

From the filmmakers: “Like the Amish in the US, the Mennonite Christian community shuns the modern world. Most Mennonites live in secluded, self-sufficient colonies. We get a rare glimpse into the life of a devout and isolated community. The Mennonites embrace isolation, which in their eyes helps protect them from the temptations of the modern world. At first glance, time seems to have stood still in the Mennonite colony in Belize, where people still travel by horse-drawn carriage and do without conveniences such as televisions and electricity. They still speak an old form of the German dialect Plattdeutsch. But modern life is slowly making inroads in Little Belize. Wilhelm, the community’s former doctor, was expelled for owning a mobile phone. Fearing that their community was being tainted, some more traditional members decided to found a new colony in a remote jungle in Peru, where they hope to live according to old customs and religious beliefs. For the first time ever, a camera team was granted access to one of Central and South America’s traditional Mennonite colonies” Watch: