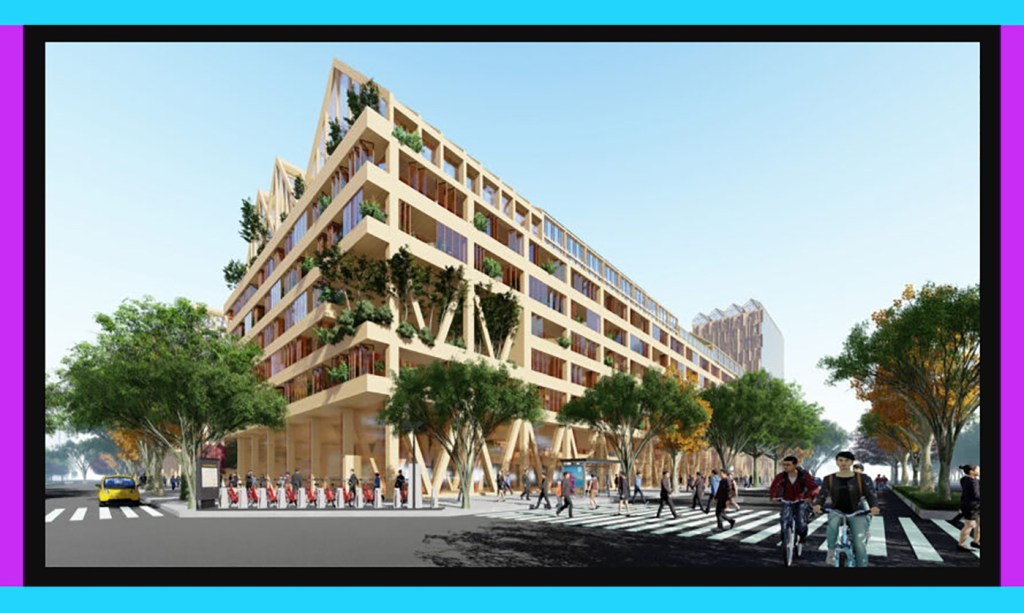 Xiong’an New Area is a five-million-person city 80 miles southwest of Beijing that the Chinese government is planning as a sustainability model. It features massive green spaces, streets untarnished by many cars, and is powered by clean energy. Its primary purpose is to manage both climate change and pandemics.

A new design of a mixed-use community called “self-sufficient city” shows what neighborhoods in Xiong’an New Area might look like. The studio Guallart Architects have recently won the international competition for the design, though the next steps for development haven’t been confirmed yet. “We are fighting in the crisis for life and for the climate at the same time,” said Barcelona’s former chief architect Vicente Guallart, the founder of IAAC and Guallart Architects.

Native plants and garden plots would surround city blocks, and most streets are designed to prioritize people riding bikes or walking, not vehicles. People of all income levels and ages would have apartments with large balconies and built-in sections for gardening. Vertical farms and greenhouses would sit on the roofs adjacent to rooftop homes with gardens of their own.

The benefits of on-site food production include fresh daily produce with a zero-carbon footprint. The balconies provide each apartment with a private outdoor space designed to fit a landing zone for drone deliveries.

The wooden buildings get electricity from their on-site solar power and are expected to use 80% less energy than standard buildings. Each apartment building has coworking spaces people can use, and in the case of future outbreaks, apartments are designed with room to work at home if they are in lockdown. The building also includes manufacturing spaces, giving residents access to 3D printers and other tools, allowing them to make parts for repairs in their unit.

In 2012, I wrote the book The Self-Sufficient City, arguing that with the digital world, we should reinvent globalization in such a way that we produce resources locally—energy, elements, and things—while we are globally connected.

Guallart’s team worked on the design while they were under lockdown in Spain. “This pandemic has demonstrated the importance of essential resources and services, and how external dependence in terms of energy, food, or industrial products can seriously affect people in times of crisis,” he explained.

The on-site gardens and greenhouses can produce almost half of the food for residents in the city. The architects estimate that they can grow around 40% of the food required for a vegan diet. “We imagine that food also should continue [growing] around cities, but shouldn’t be sent with containers around the world,” Guallart highlights.

Additionally, residents will be able to let neighbors know if they have food available to sell via an app. Locally grown produce will also be accessible at markets on the bottom floor of apartment buildings.

While China is building a high-speed rail to the Xiong’an New Area, people will be able to reach daily needs by biking, skateboarding, or walking, with stores, schools, and offices, near housing. “This model of buildings and communities is more appropriate for the 21st century. Cities shouldn’t have a center and periphery (or downtown and suburbs) but should be organized with self-sufficient neighborhoods where you live, work, and rest,” he added.

We believe that it is necessary to strengthen local communities and people and reinvent what globalization means to go from a model of centralized cities typical of the industrial age to a model of distributed cities, typical of the internet age. Given that the ecological component is key in the proposal, we believe that we are moving toward cities that promote life, which we could call bio-cities: Urban planning has to learn more from nature and develop in harmony with it.

The ‘self-sufficient city’ can be seen in the video below.