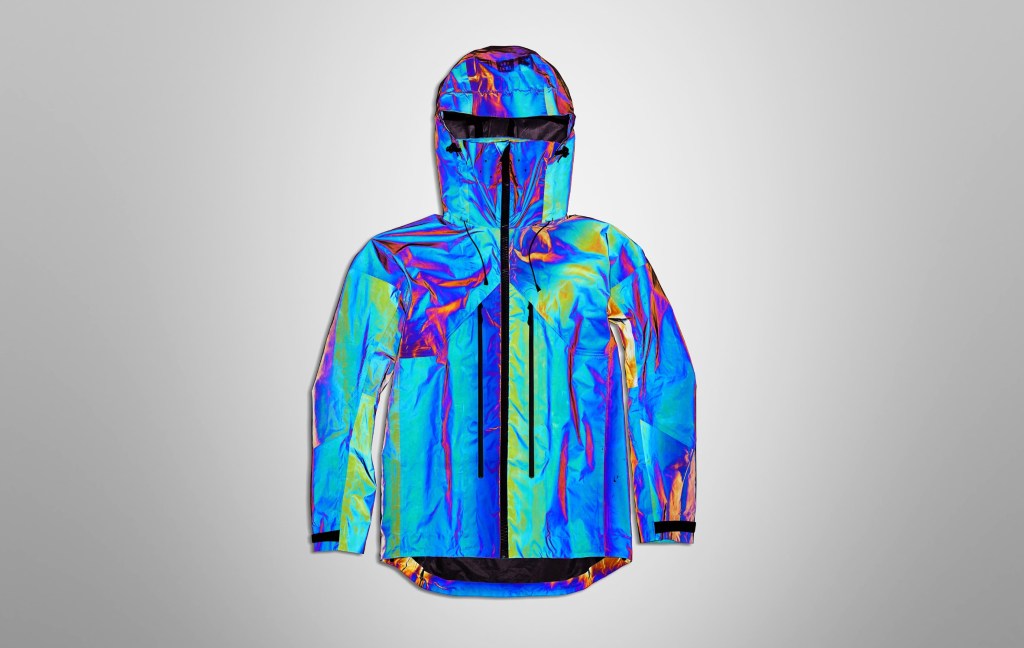 Over the past 500M years, squid has evolved the ability to change their appearance and color at high speed to either hide, attack, or communicate. Vollebak has replicated elements of this biological survival technique using lasers, resin-coated polyester, and over 2B microscopic glass spheres. Each square centimeter of the jacket is covered with approximately 40K spheres.

The result is a heavy-duty, color-shifting, futuristic-looking snowboard and ski jacket. While it looks black or slightly metallic in dull light when exposed to sunlight or bright light, it instantly reflects every single color in the visible spectrum.

The jacket’s “iridescent and radiantly bright” appearance tricks the eye with shape-shifting liquid patterns that look like it was made via computer graphics. The effect copies a squid’s ability to change the color of its skin.

On a squid, this phenomenon is caused by microscopic disc-like structures on the skin’s surface that react to an intricate network of nerves, while on Vollebak’s jacket, the glass spheres take on this function. Both reflect and scatter all the visible light to give an iridescent effect by using tiny “disruptively structured” structures on their surface to interfere with light waves.

The Black Squid Jacket focuses on replicating the elements of squid skin that make it hyper-visible. When light hits the jacket, it travels through the curved surface of these black glass spheres and strikes the back of them before being reflected back at the original light source and scattered away from it simultaneously so that the fabric looks like it’s emitting light.

Each viewer will experience different iridescent colors and patterns, depending on which angle they are looking at the jacket.

If there is a storm, this jacket is ideal for wearing because it’s designed to be used in harsh conditions where it makes the wearer highly visible in bright light, and it’s fully windproof and waterproof. It includes two waterproof front pockets, an internal zipped phone pocket, and an integrated “storm flap” at the back to prevent water leakage.

The Black Squid Jacket has an ultra-high collar lined with merino wool to be comfortable over the nose and mouth. The collar and hood are designed to operate independently. Therefore, users can ride the snowy mountains with their faces covered but the hood down.