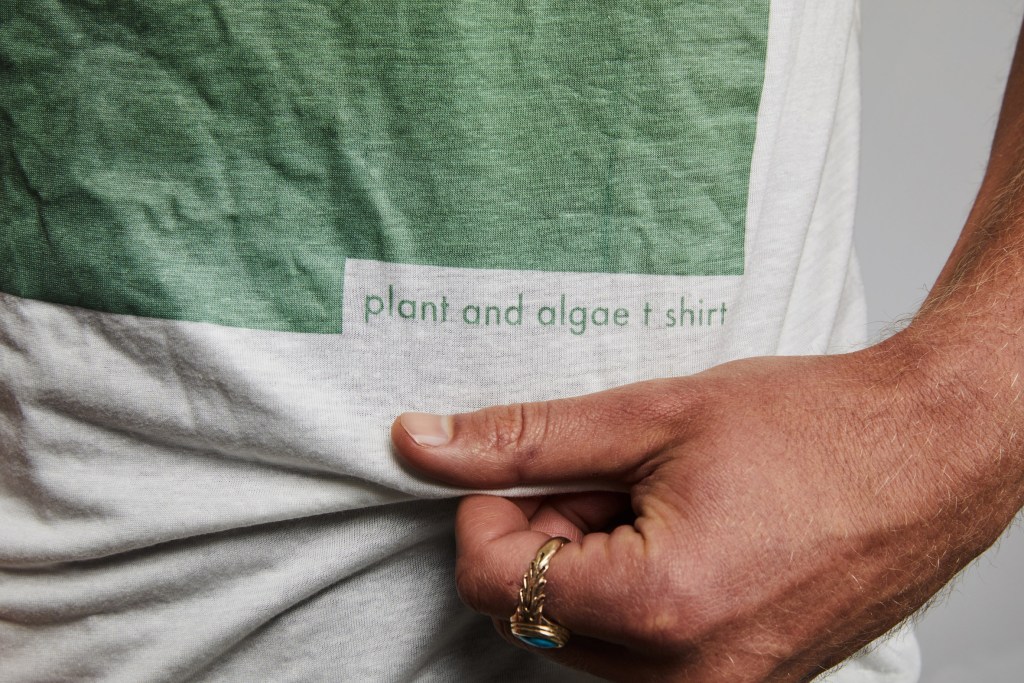 Experimental clothing brand Vollebak has developed a t-shirt made entirely from algae and wood pulp. Impressively, the t-shirt breaks down in a composter or soil within three months.

Users can wear the t-shirt guilt-free! Not only is it compostable, but the shirt is made from wood pulp from sustainably managed forests. Spruce, beech, and Eucalyptus are chipped and pulped before turning into a fiber, then yarn, and finally eco-friendly fabric. The wood is collected from sustainable forestry plantations and certified by the Program for the Endorsement of Forest Certification and the Forestry Sustainability Council.

The green square design on the front of the t-shirt is made entirely from algae. The algae are grown in bioreactors, which is a process that transforms the plant into a printable green ink. The method involves passing water from a bioreactor through a filter that separates the algae, leaving an algae paste. This residue is dried in the sun to make a fine powder before mixing it with a binder to create the algae ink.

Algae’s natural properties cause the green design to fade and change color over time; therefore, each t-shirt is unique because the green square will be a different color green.

You can think of algae as a space-age material that just happens to be 1.5 billion years old.

Once the wearer doesn’t want the t-shirt anymore, they can either throw it in the compost bin or bury it in the ground, where it should decompose over three months. “The plant and algae T-shirt needs the fungus, bacteria, and heat from the earth to start to break down. So, if you want it to disintegrate, you have to bury it in the ground or put it out in the compost –it’s not going to happen in your wardrobe,” Tidball explained.

However, Tidball notes that the environment affects the rate at which the t-shirt decomposes. More bacteria and fungi are exposed to the shirt in hotter conditions, causing it to break down faster.

While industrial composting will be the fastest, few people have access to that. With home composting or with it being buried in the ground in soil, you’re looking at around 12 weeks for it to disappear. In our tests during a summer heatwave, composting it beats burying it in soil, but at another time of the year, the result could be the other way around.

The t-shirt becomes ‘worm food’ once it decomposes, meaning it turns into the same organic matter as the dead leaves, grass, and plants on the ground consumed by worms.

Algae can’t survive once it’s removed from the water, so the algae on the T-shirt is no longer alive. And since it started life as a plant rather than a chemical dye, the natural pigment in algae is more sensitive and won’t behave like color normally does on clothing. As soon as it comes into contact with air, it starts to oxidize, which means the green will begin to change color, and your T-shirt may look different from one week to the next as it fades, making every T-shirt unique.

The post T-Shirt Made From Algae And Wood Becomes Worm Food In 12 Weeks appeared first on Intelligent Living.