Bannon: Hunter Biden Emails are Real and Only Tip of Iceberg 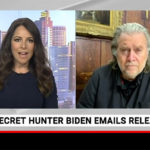 The revelations come as the New York Post this week released an expose detailing links between Joe Biden and his son who was paid at least $50,000 a month to sit on the board of a Ukrainian energy company who allegedly set up a meeting with the then-Vice President.

Information regarding Hunter Biden’s relationship with the Ukranian energy company was sourced from a collection of emails recovered from a laptop that was allegedly dropped off at a repair shop in 2019 and later given to the FBI.

It was a water-damaged MacBook Pro and the person who dropped it off never paid for the service and didn’t retrieve it or a hard drive on which its contents were stored – according to the shop owner who said he repeatedly tried to contact the customer.

Sky News host Sharri Markson said the owner of the repair shop in Biden’s home state of Delaware says when he did not hear back from the FBI, he made a copy of the hard drive and gave it to Donald Trump’s lawyer, Rudy Giuliani.

Emails on the laptop revealed that Hunter Biden had planned to introduce his father – the then-Vice President – to an executive at Ukrainian energy company Burisma, a company where Hunter served on the board of directors.

Publicly, Biden has said he’s never spoken to his son about his overseas business dealings. These emails seem to indicate otherwise.

In one message sent by Vadym Pozharsky in April 2015, he wrote: “Dear Hunter, thank you for inviting me to DC and giving an opportunity to meet your father and spent (sic) some time together. It’s realty (sic) an honour and pleasure.”

In response to this news, Facebook and Twitter both censored the article from the New York Post, advising they were “limiting the distribution” of the story on their platforms until a third-party contractor can “fact check” the article.

Mr Bannon told Ms Markson, “Hunter Biden’s lawyer has come to us both with phone calls and with emails saying, ‘hey, I’ve got to get the hard drive back’.”

“This is not some Russian intelligence operation; they admit it’s their hard drive,” Mr Bannon said.